Combining trusted health IT experts with personality and creative flair

Ageing populations, a rise in chronic conditions, the drive for better preventive medicines and an explosion in data require rapidly changing and disruptive healthcare solutions and marketing to go with it.

The health IT market in the UK alone is forecast to grow to £5 billion in 2021 with the NHS – with acceleration and adoption of technologies spurred on by the Covid-19 Pandemic. But with great opportunity comes great competition, which means that YOU need to stand out.

We can help. Silver Buck are not just marketeers, public relations, events and business development evangelists, we are the parents, children and friends who want to help you lead the healthcare revolution in moving from an intermittent and reactive system to one where we use technology to prevent disease and provide better, safer patient care.

As a healthcare IT specialist agency we cover a diverse area of expertise from cloud, cyber, AI, EPR, systems integrators, start-ups, private healthcare providers, NHS organisations and government to medical devices and clinical research organisations. Click here to see the types of organisations we represent.

At Silver Buck, we don’t just create content (although we’re great at that too), we generate and rebuild strategies and campaigns that constantly evolve to the changing behaviours of your target audience to maximising visibility and sales.
By working with our London based, highly specialist team who have decades of experience working across the most influential health technology organisations in the world, you’ll receive access to our highly extensive networks and the best know-how in the industry.

“Sarah’s breadth of market and customer knowledge, helped us make the investments that gave the greatest benefits to our customers and positioned the company for success”

Healthcare is often said to be lagging behind other industries in its adoption and advancements of technology. But that doesn’t mean that PR and marketing efforts in our sector should be too. Silver Buck was born out of a frustration by health IT companies that there are next to no specialist health tech communications agencies or that their existing agency keeps doing the same thing and expects to get different results. We noticed this first hand whilst working in house and running some of the biggest PR, marketing and events in the health IT industry in Europe. When we needed extra external support there was no agency that could infuse creativity with meaningful engagements and ensure the fully integrated approach to PR and marketing that we needed. That’s why we saw a huge gap for a specialist health IT agency that could move with ever changing PR and marketing landscape.

Sarah has lived and breathed healthcare technology her entire working life. Her passion for innovative and entrepreneurial PR and marketing practices combined with access to a hugely extensive network means she’s a strategic thinker, with a creative, hands-on attitude and a proven track record in leading communications from grassroots to board level within complex and high-profile organisations.

Living in London for the past 10 years, she started her career as a senior journalist at the UK’s best known digital health publication DigitalHealth.net before she decided to apply her skills to the world of health tech PR and marketing and enhance the profile of NHS organisations as well as health IT providers. After spending several years as the European head of media and marketing for HIMSS, a position that also meant looking running the organisations key accounts as well as a position on the governing council, she joined forces with the company’s former Managing Director to form Silver Buck.

When Sarah isn’t working, you’ll find her running the Thames Path in London, usually training for a full or half marathon or taking some time out in the countryside away from the big smoke. 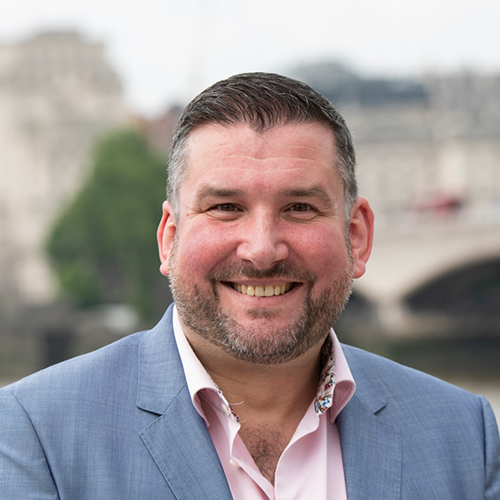 A successful entrepreneur, accomplished businessman and strong leader, Steve has been a big-name in health IT, exhibitions and conferences for over 20 years.

Steve’s first involvement in the events industry came in 1990, when he joined TAS Exhibitions working on trade events in the leisure industry but shortly after he began working for EMAP – looking after major blue-chip events. It was in 1997 that he first came to be involved in healthcare, becoming operations director at British Journal of Healthcare Computing, where he helped to grow Healthcare Computing (HC) into the industry’s leading UK event.

In 2002, he started his own business – Crusade Exhibition Services – a staffing and logistics business, which quickly grew to in excess of 100 staff and won the very prestigious ‘Team of the Year’ accolade. After forging a strong working relationship with the NHS, he created Citadel Events in parallel to Crusade, which he sold to the renowned Chicago-based health organisation, HIMSS, in 2014.

Steve was subsequently appointed as Managing Director of HIMSS Europe and HIMSS UK – a position he relinquished earlier this year, to start Silver Buck, with his former HIMSS Europe colleague, Sarah Bruce.

Outside of work, Steve is a huge sports fan and is a lifelong supporter of Wolverhampton Wanderers FC.

Get In Touch
Scroll to top

If you do not want that we track your visist to our site you can disable tracking in your browser here: